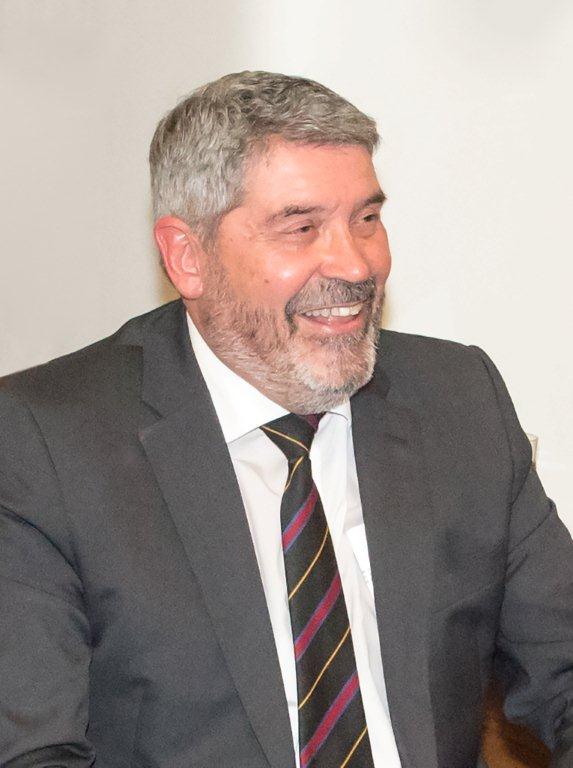 The CCLEC family is deeply saddened by the news of Mr. Euan Stewart’s death – the first Permanent Secretary of CCLEC. He passed away on Friday, August 3rd 2018 at his home in the UK.

In 1999 Mr Stewart was seconded by H. M. Customs & Excise, United Kingdom, to head the CCLEC Secretariat as Permanent Secretary (PS). Prior to his attachment to CCLEC, he served as Deputy Comptroller of Customs in the British Virgin Islands for a number of years.

He was a member of the CCLEC Training Development Team which developed the CCLEC Junior Officer’s Basic (JOB) course and Commercial Fraud course. He was also the main architect behind the concept of the CCLEC clearance system for small vessels known as RCS.

His legacy will no doubt be Customs modernization in the region. Although this has been a slow process, his contribution to capacity building, automation (including ASYCUDA), and enforcement forced many countries in the region to embrace reform and modernization of Customs.

He was a good example of a PS, statesman, strategic thinker and leader of men. He was firm and yet so friendly. He touched our lives and careers, significantly. May he and his ideals remain in our hearts forever.
Our deepest sympathies are with the family in this difficult time Commissioner Velma Ricketts Walker received the award on behalf of her department. 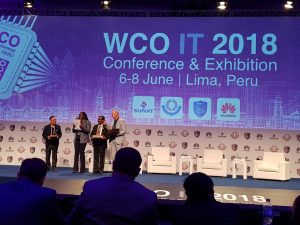 Mr Raju Boddu, Comptroller of Antigua& Barbuda Customs and Chair of CCLEC Finance Committee, represented CCLEC at the 17th WCO IT Conference & Exhibition which was held in Lima, Peru. Delegates from seventy five countries attended the event which took place from June 6-8, 2018.

Mr Boddu presented on the topic “Connecting dots in Maritime Environment”, with particular reference to Trade Facilitation, Border Security and Revenue collection which are the main functions of the customs administrations.

He described the different actors and entities in the Maritime Environment, the enormity of growing marine traffic and seaborne trade and outlined the challenges in connecting the dots; the challenges being (1) Varied legislative arrangements (2) differing National priorities in relation to border security (3) non-cooperative border agencies(4) Infrastructure inadequacies (5) Capacity and competence issues (6) Different technologies and their inter-inoperability and (7) Resource constraints

He highlighted the security challenges in the Caribbean context and the interventions of CCLEC in implementing the Regional Clearance System (RCS) for small vessels and CARICOM IMPACS Advanced Cargo Information System (ACIS).

“In the context of the complex Customs ecosystem, the actual implementation of profiling, targeting and enforcement is a herculean task if one has to depend on traditional way of managing borders” he said.

The CCLEC 40th Conference was convened in Miami from May 23-26, 2018 under the theme “Strengthening the Exchange of Information for Integrated Border Management and Risk Management to Facilitate Legitimate Trade”. Twenty two countries were in attendance as well as regional and international organisations. CCLEC was pleased to welcome Japan Customs, who was attending for the first time.

The opening ceremony was chaired by Ms Hazel Edwards of the Jamaica Customs Agency (JCA).  Director General of Haiti and Chairman of the 40th Conference, Mr Jean Jorel Janvier, welcomed the delegates and the representative from the WCO, Mr Leigh Winchell, Deputy Director for Compliance and Enforcement delivered the opening address.  The keynote address was delivered by Mrs Velma Ricketts Walker, Commissioner of Jamaica Customs Agency (JCA).

In her address, Mrs Walker noted that the advent of the information technology revolution has resulted in an extremely dynamic Customs environment with many Customs administrations having to respond to exponential increases in the volume of trade. She underlined the use of ICT, Single Window for strengthening the exchange of information and risk management as key to managing the changing landscape.

The region was also urged to be cognisant of the emerging security challenges at its borders. The ongoing unrest in Venezuela, the vulnerabilities associated with the expanding Economic Citizen program and the radicalization of individuals from the region travelling to the Middle East were cited as real border security threats.

She emphasised the need for robust information sharing between Customs administrations and border agencies. She said “If criminal networks can successfully strengthen transnational information sharing and build illicit empires…what of law enforcement? Will we adjust our sails to effectively mitigate against adverse and changing winds? We must answer the call to protect our nation’s borders while facilitating legitimate trade.” Customs, Police & other Agencies in Trinidad get training on intellectual property

The exponential growth of piracy and counterfeit products over the years has been a cause for major concern in light of their impact on consumers, brand owners as well as on economic growth.

In light of this, a one-day Anti-Counterfeit Training for Customs, Police and other Enforcement Agencies will take place on January 15 to treat with enforcement issues in Intellectual Property.

This activity has been organized by the Anti Counterfeit & Brand Protection Agency operating in Latin America and the Caribbean, DISOSA Brand Protection & Corporate Services (DISOSA BPS) in collaboration with the Trinidad and Tobago Intellectual Property Office (TTIPO).

A statement from the Ministry of the Attorney General and Legal Affairs (AGLA) notes that there are challenges as it relates to the enforcement of intellectual property legislation in Trinidad and Tobago and the wider Caribbean. It said, however, that the enforcement agencies continue to play a fundamental role in the deterrence of access to counterfeit and pirated goods.

On Wednesday CBP said the estimated wholesale value of the drugs is US$61.7 million.

It’s reported that the discovery was made between December 18 and December 22.

Over 100 guns destined for Jamaica intercepted by US cops A shipment of over 100 firearms and several rounds of ammunition destined for Montego Bay, Jamaica was recently seized by US customs.The mega bust was made by border protection agents at Miami International Airport in November during a routine inspection on a shipment.

The shipment contained two blue barrels that were said to contain personal effects.

The weapons were scheduled to arrive in Montego Bay from Miami via Kingston.

The Jamaican police are investigating.